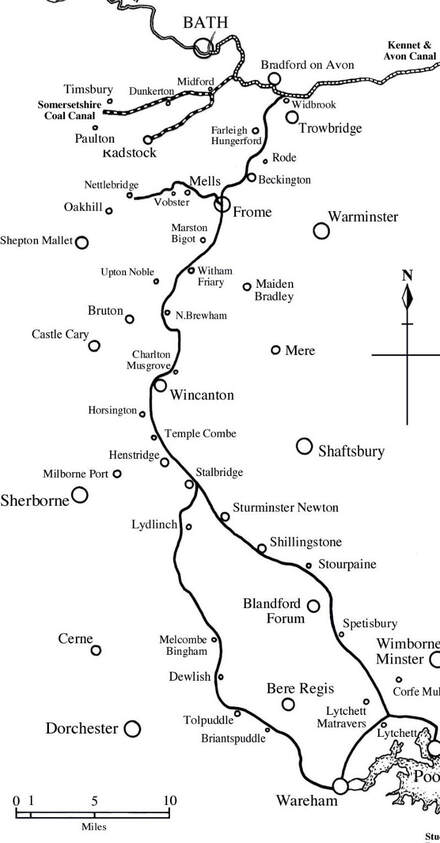 ​
​The idea of a canal was first considered at a meeting at The Bear Inn, Wincanton in 1793. The concept was to construct a canal connecting Bristol with Poole with a branch at Stalbridge to connect with Wareham.  The canal was to be known as the Somerset and Dorset Navigation Company and would carry coal South from the coalfields in the Mendips and clay from Wareham to the Potteries in Staffordshire.
​
William Bennet completed a survey of the route in 1795 and Royal Assent was granted in 1796.  There was constant dispute over the proposed route by investors, but finally the route chosen started from the recently completed Kennet and Avon Canal at Widcome passing through Stalbridge to join the River Stour at Shillingstone.  This was not what had been first proposed but it was thought still viable to transport coal which previously came by horse-power.
Work began in 1796 building the first section from the Mendips to Frome, this would have involved a considerable number of locks because of the gradient.  However, James Fussil of Frome invented a canal lift know as a “Balance System” which could lift barges up to eight metres. The whole project proved more expensive than expected and sadly the company ran out of money.  The Country was going through financial difficulties at the time due to the high cost of the Napoleonic War.  Later the route was used to construct the Somerset and Dorset Railway.
So Stalbridge never did get a canal!

The Map of Dorset, with the Canal that was never built.

"This map is both scarce and interesting. Drawn by R. Rowe and dated 1813, it shows with a solid line the course of the Dorset and Somerset Canal which, as is often the way with grandiose schemes, was abandoned before it ever reached Dorset.
Had it arrived, the map shows, it would have crossed into Dorset between Henstridge and Stalbridge, and then run through the flatlands of the Blackmore Vale at around the 200 feet contour. At Sturminster Newton and Fiddleford it would have been cut into the side of the hill, between the River Stour and the road which we know as the A357.
Written sources say the canal would have joined the Stour at Gain's Cross, between Shillingstone and Durweston, but this plan may well have been revised in the way that the map shows - bringing the canal into the river in the region of Bere Marsh, near Hayward Bridge on the north edge of Shillingstone village. The meadows here are hardly higher than the river, as the inhabitants realise every time the water rises. Had the canal been built, this is far more likely the point that would have been chosen as it fits in perfectly with the 200 ft level, which the builders would have appreciated themselves by the time they had reached this far.
The rest of the Stour would then have been made navigable, with locks, weirs and by-passes of mills, down to its confluence at Christchurch Harbour. The canal's backers aimed at intercepting the Somerset coal trade, and to take back Purbeck clay, to the potteries in the Midlands. Its wider object was to short-cut the inconvenient sea route around Land's End, and had the railways not come and fossilised the canal system (also taking its Irish labour), it is likely that the scheme would have been eventually revived and completed.
The water crossing them the country has lost (apart that is from its temporary restoration by the massive seaside floods of December 1978) was between Wyke Regis and Portland. The "Passage House" for the ferry is clearly shown.
Much of the interest in the map is going to be for its representation of the medieval and turnpike systems. Superficially, of course, there are always some archaic spellings to fall back upon - though almost all can be worked out without much difficulty. An exception perhaps is "May Pooder" near the centre of the map, which we call Mappowder.
Dorset spellings have always been notoriously difficult. It usually has something to do with having, say, a place with a name like Puncknowle and then always calling it "Punnel".
Some names have changed. Tadnoll, between Winfrith and Moreton, is shown as Portwedy Gate. A few of the smaller hamlets may have disappeared rather than merely being renamed, and it would be interesting to know if Pottern Row between Hermitage and Holnest preserved a memory of medieval tile-making. The ancient maze at Leigh merited a mention too. So did Merryfield at Rampisham, which would be a nice name for an ancient fair ground (which it probably isn't). Is there still a Maid's Hole around Ram's Hill, between Marnhull and West Orchard?"
​
[Source: map and text from my copy of 'Dorset the County Magazine', 1978].
Back to Digital Archive