Two servicemen from the parish of Stalbridge, who lost their lives in the 1st World, are commemorated on both the Stalbridge and Stourton Caundle War Memorials.

Private 12696 William Ashford, 6th Battalion of the Dorset Regiment
Willam, son of Joseph and Amelia Ashford of Stalbridge Weston, was born in November 1888. The family lived with his widowed grandfather, in one of three cottages, in what is now Corner Farm. William married Sarah Jane Vowles, born in June 1886, from Meare, Somerset in June 1910. A daughter, Dorothy Maud (Maudie) was born at Stourton Caundle, in December 1910 and a son Frederick William (Fred) in October 1912, when the family was living in Cat Lane. Before enlisting in the army William worked as a road labourer for the Sturminster Rural District Council.
William's grandparents' were Joseph (1833-1898) from Stalbridge Weston and Jane (1833-1902), (nee Gatcombe), from Henstridge, who married in Henstridge in 1853. They had 11 children.
Prior to the Fist World War there were two Ashford families in Stalbridge Weston, those of William's father Joseph and Joseph's brother Elihu (1866-1915). Elhiu was a wagoner on a farm, and married Sarah (nee Jeans) (1868-1921), daughter of George and Rosana Jeans, at St Mary's, Stalbridge in 1889. Children as listed on 1901 and 1911 census returns were Beatrice born 1894, Alice 1899, James 1902, Lucy in 1904, and Reginald 1906.
William's parents were Joseph (1861-1925), a railway platelayer, who was listed as disabled at the time of the 1901 census, as the result of an accident, and Amelia (nee Mullett), (1859-1942). A brother Tom was born in 1884, sisters Winifred, in 1885, Edith in 1890 and Violet 1894 and finally a younger brother, Robert in 1901. William's brother, Robert (Bob) Ashford, (1901-1983), lived for many years in the right hand side of the pair of cottages at Brick Hill, formerly known as Brickyard Cottages.
William's daughter, Dorothy married Cyril Martin in September 1940 at Wincanton. His son Frederick William (Fred) married Violet Mortimer in September 1939 in the Taunton area, later emigrating to Australia.
William enlisted at Sturminster Newton on the 28th December 1914, joining the Regiment on 8th January 1915. In the March of 1915 the Regiment transferred to the 50th Brigade Northern Division, moving to Romsey in the May of 1915. The 50th Brigade embarked for France, on the 13th of July 1915, landing at Bolougne the following day, where it joined the 7th Brigade. William was probably in D Company, which comprised mostly of Dorset men. The Brigade remained in Flanders for the remainder of the war, taking part in many actions on the Somme in the Ypres area. The Dorset’s narrowly avoided the massacre near Fricourt on the 1st July 1916, when 60,000 British troops fell in 24hours, when orders for the Dorset’s to advance were cancelled at the last minute. In the January of 1917, the Regiment took over trenches near Fregicourt on a 500yard frontage, with one company at a time held in reserve.
William received wounds to the right arm and left leg on the Somme battlefields, on the 21st February 1917. William died in a field casualty clearing station at 5am the following morning, from the injuries he incurred that day during the Battle of the Ancre Valley, which started in the January of 1917 and ended on the 22nd February. The Germans were pushed back five miles along a four-mile front, before starting a strategic withdrawal to the Hindenburg Line.
2nd Corporal Alfred Joseph Hann, 4795 Oxfordshire and Buckinghamshire Light Infantry, and WR/ 282931 30th Light Railway Operating Coy, Royal Engineers,
Alfred was born in 1879 at Stalbridge and is listed in the 1911 census as a baker and labourer aged 29, the son of Kate Hann (a single mother) born in Stalbridge in 1856.
Kate Hann lived with her widowed mother Love Hann born at Stalbridge in 1831 both of them worked as Laundresses. Alfred had two younger brothers, Ernest 1884 and Walter born in 1896.
Alfred Joseph Hann married Lilly Jane Harris, born January 1872 at Stourton Caundle, at St Peter’s Church, on the March 12th 1916, just eight days before his mobilisation date. They were both living in Stourton Caundle at the time, with Alfred listed in the 1911 census as working as a groom. Her father, Samuel, was a grocer and the proprietor of the village shop at Golden Hill.
Alfred enlisted with the Oxfordshire and Buckinghamshire Light Infantry, transferring to the Royal Engineers in the March of 1917 as a Lance Corporal. The Company had 200 men and their duties were to run the trains on track laid by the Royal Engineers, transporting troops, materials and supplies to the front line. The 30th Light Railway Company was formed in France probably based in the Arras area of the western front. Alfred lost his life, aged 36, on the 7th June 1918 aged 36, and is buried at the Maroefuil Cemetery 6km north west of Arras. 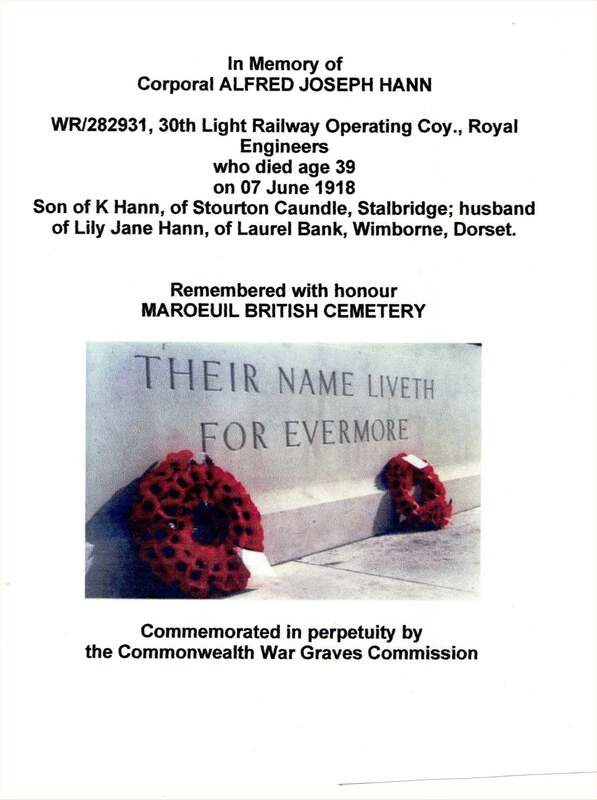 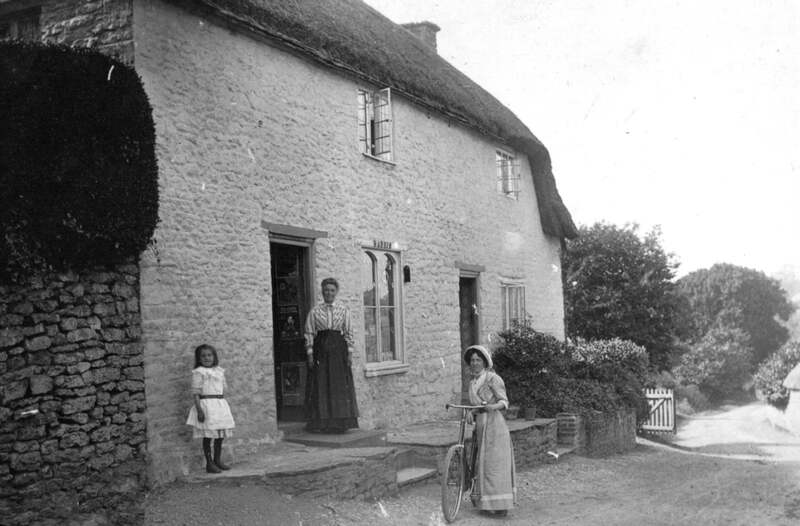 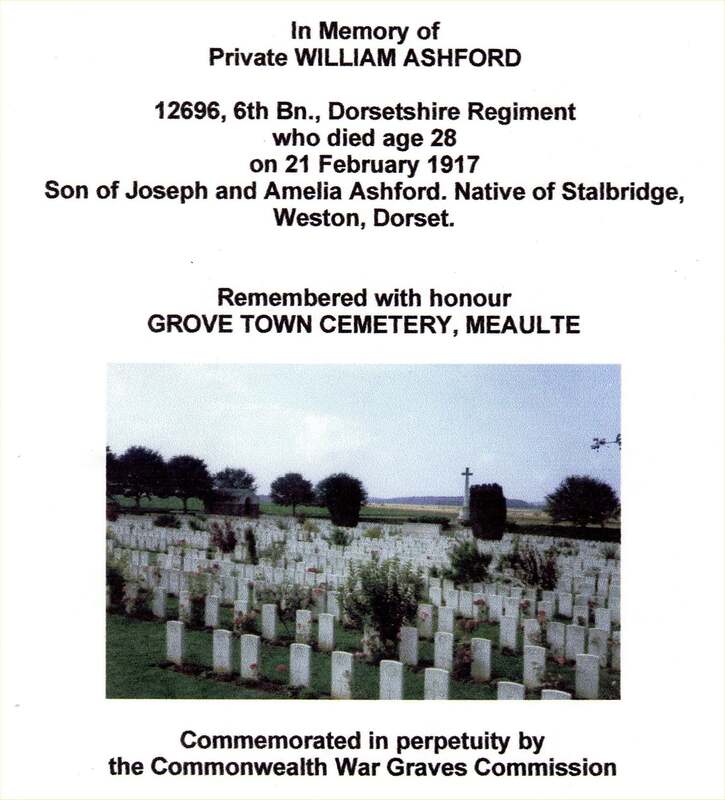 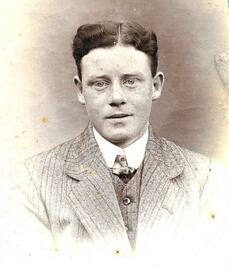 ​Ian Semple
Sidney Gawler was a cousin of the Ashfords, he served in the 5th then 6th Dorsetshire Regiment. Died of wounds Thursday 9th November 1916 Aged 24 years. On the 28th October 1916 the 6th Regiment was in Mansel Camp near Meaulte and set out to on the 29th October to relive the 2nd Scottish Riffles …The weather at the time was atrocious moving with great difficulty on roads of liquid mud. As they approach the German shelling became almost unbearable and it is thought that Sidney Gawler died soon after being wounded in the operation.
His Grave is in The Grove Town Cemetery, Meaulte, Somme, France…
When Sidney Ernest Gawler was born in 1892 in Stalbridge, Dorset, his father, Henry, was 24 and his mother, Emily (nee Ashford), was 27. He had three brothers and three sisters.
​​Back to Digital Archive