Walter Charles Lovelace was born at Hampreston near Poole in 1872, the youngest son of Robert Samuel Lovelace and Mary Ann Hester Hillier and Robert Samuel was the eldest son.  Robert married Caroline Hannam in Henstridge on  3rd February 1881. Walter married Elizabeth Ann Harris in Stalbridge on 25th January 1894.
In the 1891 census Walter is living with his older brother Robert in Henstridge, his occupation is the same as his brother cycle maker. Robert employed Walter and probably taught him his trade.
Robert Samuel Lovelace, who began business as a blacksmith in 1881 in Henstridge and soon afterwards branched out into the bicycle world by making one of those high machines known as the "penny-farthing" because of the small wheel at the back. When safety machines were introduced his wife rode the first model built for women 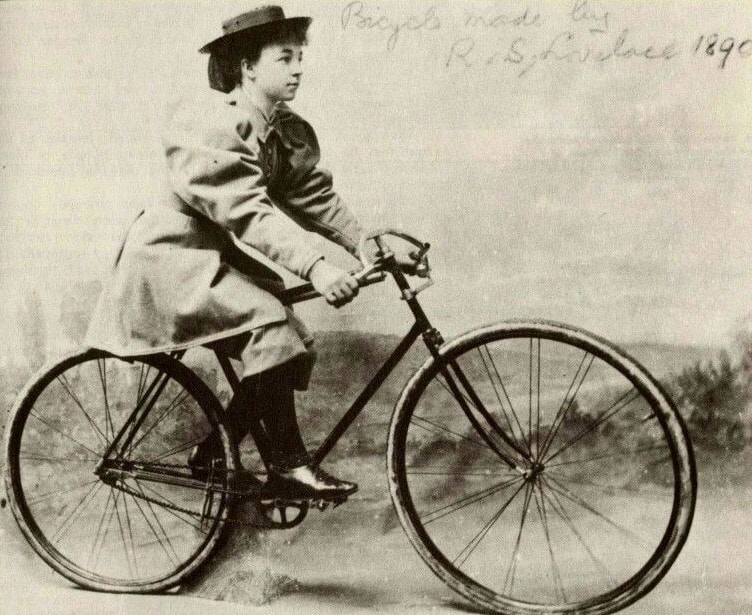 Bicycle made by Robert Samuel Lovelace 1890
​Robert was regarded as one of the West of England’s best-known inventors, and was responsible for repeated improvements in the comfort and construction of bicycles.
In 1901 Walter and his wife Elizabeth are living in Blackmore Lane Henstridge and he is still working for his brother Robert.
For a while Walter and his wife lived with his elder brother in Henstridge helping him with bicycle production.
By 1911 Walter and Elizabeth had moved to Stalbridge and opened a garage in the High Street (next to the old Lloyds Bank) where he also made and sold bicycles in a wooden shed behind the garage. 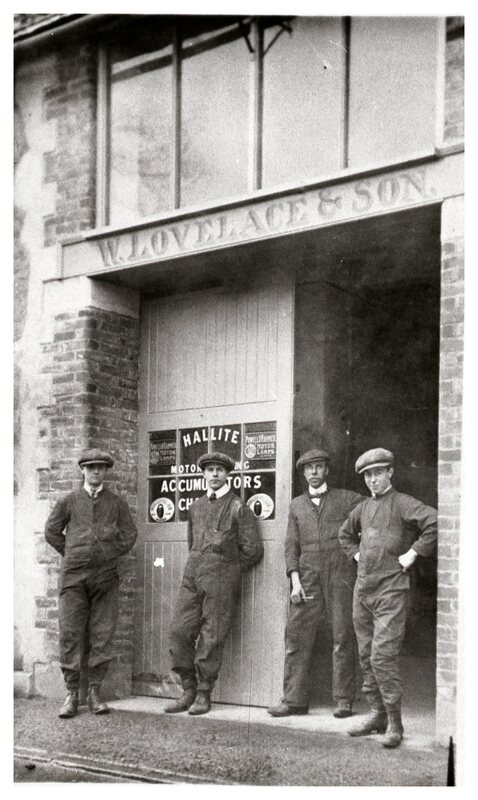 W Lovelace Garage High St. Stalbridge
After the First World War bicycles were being mass produced, so Walter concentrated on Ford motor cars for hire, and providing trips in charabancs to Cheddar and Weymouth.
In the Stalbridge Estate Sale of 1918 Walter bought the piece of land at the bottom of Church Hill where he had his bicycle workshop for £150.  He later used this area to park his charabancs. He also bought his garage and workshop in the High Street for £160
Walter had three children, Daisy, Bertram and Violet.  Bertram later joined his father in the business.
Bertram married Evelyn Andrews on 10th April 1920 at Stalbridge; she was the daughter of James Andrews, a carpenter.  They lived next to Dick Curtis in Church Hill. During the Second World War the area where the buses were parked was used by the Army as a canteen for soldiers stationed opposite in the Red Lion.  After the war the business was sold to Patrick Herbert Lewis.

Newspaper cutting from Western Gazette 17th May 1929
WHIPPET SALES AND SERVICE – See the New Superior Whippet, the Smartest Light Car at anything like the Price £198.  We will give you a Demonstration Run without obligation – W LOVELACE & SON, Motor Engineers, Stalbridge, Dorset

After the Second World War, the Lovelace bus business was bought by Patrick (Pat) Herbert Lewis having returned from serving in the Canadian Airforce.

Pat modernized the bus fleet and continued to provide trips, he also ran the school bus service to Sturminster Newton which many in Stalbridge will still remember.