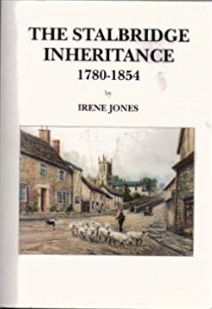 Stalbridge has a rich history, its famous former residents including Robert Boyle, whose experiments in Stalbridge Park in the 17th century resulted in the compression of air, which gave us our pneumatic tyres, and James Thornhill, painter of the dome of St Paul’s. And the grandfather of the writing Powyses was Rector of Stalbridge for thirty years in the 19th century. So it was particularly fortunate for the town that an enthusiastic scholar and local historian named Irene Jones came to live in Stalbridge in 1973.

Irene, a Yorkshire woman, trained as a teacher after the war. She married Bernard Jones in 1947 before he started his degrees at Leeds University, his special subject being the poetry of William Barnes. This gave Irene an abiding interest in the work of William Barnes, Thomas Hardy and the Powys brothers. In this period she was able to meet John Cowper Powys and his sister, Lucy Penny, grandchildren of the Victorian Rector of Stalbridge.

Eventually, after various teaching posts in Dorset and some time in South Africa, Irene took a teaching post at St Gregory’s School, Marnhull, and settled in Stalbridge. She took a BA degree with the Open University, became local correspondent for the Western Gazette and chairman of the Stalbridge branch of the Workers’ Educational Association, took singing lessons with Mavis Bennett, a renowned singing teacher, and sang in the Stalbridge and Sturminster Newton Choral Societies.

When plans were advanced for a Sturminster Newton Museum in the Old Workhouse Chapel, Irene joined the committee and helped to present the Robert Boyle and Thornhill exhibitions there. She also wrote booklets to accompany these exhibitions. Her drive and enthusiasm resulted in the beautiful 300th anniversary service held in Stalbridge church on 19 January 1992 to commemorate Robert Boyle’s death. She also wrote a much-prized history of Stalbridge church.

Once retirement gave her more time, Irene set about systematically gathering material for a history of Stalbridge. She was already a member of the Dorset Natural History and Archaeological Society, the Friends of Dorset Archives and the William Barnes Society, so she decided to enter for the Mansel-Pleydell Essay Competition, a long-standing competition for original research into an aspect of Dorset history. Her subject was the history from 1780 to 1854 of the Stalbridge Estate, then owned by the Earls of Uxbridge. The second Earl, who lost his leg at Waterloo, became Marquis of Anglesey in 1815.

On holiday in Anglesey in 1990, Irene began enquiring there about the Stalbridge Estate. Finally, she found the Archivist of Bangor University sitting on six sacks of papers relating to the Dorset estate. She at once set about getting them transferred to the Dorset Record Office where they belonged. Here she could work on them easily and, a true historian, was excited by them. ‘The biggest thrill,’ she wrote, ‘was handling scraps of paper: bills handwritten by Stalbridge glaziers, thatchers, masons, quarrymen, carpenters and builders for work done nearly two hundred years ago.’

There was by now a bitter poignancy to Irene’s situation. She had been diagnosed with cancer in 1988. It was at first thought to be treatable and she had several operations to deal with it. By the beginning of March 1992 she was fit enough to travel to Dorchester once or twice a week to examine the records, as well as visiting the National Records Office in London to compile her essay. She handed it in at 11.30 on 31 December 1992, the closing date for that year’s Mansel-Pleydell competition and, when it won first prize, insisted with characteristic generosity that it was ‘on behalf of Stalbridge’.

Finishing the research into the entire history of Stalbridge that she had been immersed in throughout her retirement now became a race against time. By the beginning of 1993 her health had deteriorated and by June the only hope the doctors could offer was that she concentrate on her writing. With support from Macmillan nurses and Stalbridge doctors, she carried on the work, organising the printing through her own specially created Larkwood Publishing of The Stalbridge Inheritance, based on her Mansell-Pleydell essay. When this went off to be printed, she concentrated on getting the rest of the research ready for publication.

In September she spent some time in Yeatman Hospital, Sherborne, intending to return home shortly. The Yeatman at that time had an annex with a sitting room, so she moved in there with her research papers, word processor and books. She continued checking, proof correcting and issuing instructions for photographs, as well as receiving many visitors. I was one of these and watched her correcting her manuscript in between taking shots of morphine.

Irene was not to return home but died on 25 September 1993, so she did not see The Stalbridge Inheritance in print. It was collected from the printers two weeks after her death and put on sale in Stalbridge. There now remained the virtually complete manuscript of the history of Stalbridge, up to the point where The Stalbridge Inheritance began in l780. It was unthinkable that such a piece of thorough scholarship should be allowed to remain hidden in a drawer, but how to proceed?

Richard Jones, Irene’s son, explored every possibility. The Ring Committee, which published a monthly Stalbridge magazine, The Ring, offered to help and its treasurer was able to convert the existing disks. The Somerset and Dorset Family History Society, the Lottery, various local printers and Halsgrove Publishing, specialising in local history, were all approached but without result. Richard and two people who had been involved from the beginning investigated modern printing technology and re-photographed many of the pictures, using a modern digital camera. Finally, sixteen years after Irene Jones’s death, David Burnett of Dovecote Press was approached. He responded to the group’s enthusiasm and the Dovecote Press is to bring the book out later this year. It is to be called Stalbridge: From Domesday to George III, although it will contain within it invaluable research into Roman and Saxon Stalbridge.

Irene Jones was a kind, conscientious woman, totally without pretension. She was concerned that the rich heritage that has come down to us from the past should not be neglected but should be used to inform and understand the present. The Christian faith meant much to her, so it is especially fitting that any profit from the sale of the book should go to the Friends of St Mary’s Church. This organisation exists to protect the fabric of the parish church – the background to so much Stalbridge history.

Any Dorset town or village can assemble its history and get it printed before it is lost. Old people’s memories can be invaluable and fascinating. A group can be set up to research a particular feature – the church, its incumbents, the churchyard or a very old house, and the local Family History Society may well be able to help. Family history research is one of the fastest-growing leisure activities in this country. And such research can be an enjoyable social occasion with the group meeting in each other’s houses as well as holding open meetings and readings.

I am often asked, ‘Is local history important, and if so why?’ Of course it is important, for it is the only effective means we have of understanding the present. It gives continuity to the generations and a sense of sharing in their joys and sorrows. Children love it. The market cross, the poor house, an old farmyard now an arts centre, the 18th-century silk works (where children were ‘put to the silk’ instead of going to school): all these Stalbridge landmarks fascinate children. One of the most fascinating of them all, though, is ‘The Blind House’. This has now been incorporated into someone’s house as an extra sitting room and a window put in, but for many years it was a dark, windowless little hovel where local drunks were put for the night to sober up.

Researching the history of the place where you live gathers its own momentum and enthusiasm. For Irene Jones her research defined her last years against the sadness of her circumstances. Now, after many setbacks and delays, we are looking forward to seeing her work published and available at last. For her son, Richard Jones, the frustrating years of following up publishing opportunities that led nowhere are coming to an end. When Richard was asked to provide a quote for the ending of this feature he replied at once: ‘Use the last verse of William Barnes’s last dialect poem – but change the pronoun:
“An’ oh! it is a touchen thing
The loven heart must rue,
To hear behind her last farewell
The geate a-vallen to.”
​
Credits
(Dorset Life:  Hilary Townsend May 2009)