The Royal British Legion was sixty years old this year, and it is interesting to record that Stalbridge was involved in the movement from its inception. The first recorded meeting took place on Friday 30th May 1919, presided over by Captain V . G. KENNARD of Frith House. Lt. Col. COLFOX attended to explain the objects of 'COMRADES OF THE GREAT WAR'. A Post was formed at Stalbridge - such names as V . G. KENNARD, A. G. MEADER, Dr. H.H. MOYLE, R. CURTIS, C. BROADWAY, A. S. FERRIS, W. CUMMINS, W. G. CURTIS, A,V.WEBBER, SHILL and H.C.PARSONS appear in the list of Officers and Committee elected at that time. It is thought that 43 members were present on this occasion, but by the end of twelve months the numbers had increased to 122.
Various meetings were held in 1919, and in 1920 the idea of purchasing a hut was discussed and agreed. Funds were raised by means of loans from various members, augmented by other fund-raising activities, and it is presumed that the purchase was made and that the site was the access road to the area on which the Stalbridge Hall now stands.
The new hut was opened on the 8th February 1921, when a Social and Dance was arranged for the occasion.
At a General Meeting held in the Hut on FRIDAY 8th APRIL 1921 it was unanimously decided to amalgamate various existing Societies and to adopt the name 'BRITISH LEGION'. From then on all Meetings took place in the Hut, which became the Legion's official venue. Records exist of various meetings held during 1922, 1924, 1926, 1927 and 1929. It was then that the decision was taken to sell the Hut to Mr. W. DIKE, with the proviso that the Legion be allowed the use of two of the rooms pending their finding alternative accommodation.
The search for an alternative Club site for the Legion continued during 1929, 1930 and 1931. Various sites were considered, notably a piece of land offered free of charge by Mr.G.E.PRIDEAUX in Grove Lane. This was finally rejected because of unacceptable conditions the donor wished to include in the contract.
On 2nd SEPTEMBER 1931 the decision was made to purchase the site on BARROW HILL from Mr. DREW, for a price of £22.10.0. At a meeting in NOVEMBER of the same year a Tender from Mr T.HEDDICH was accepted. This was in the sum of £425 and carried the stipulation that work was to be completed in three months.
This brings us to the beginning of the Legion on its present site. Its progress from then on is perhaps a subject for a future article. Certainly its prestige and standing in the village needs no emphasis.
To return to the 1919/20 roll of members - the names of all these stalwarts are still on record. Space precludes publication of them all, in fact it would be invidious to publish any. The list reads like a current Voting Register, practically every male who survived the War must have been there.
Ian Semple 2021 (Extract from the Ring Magazine) 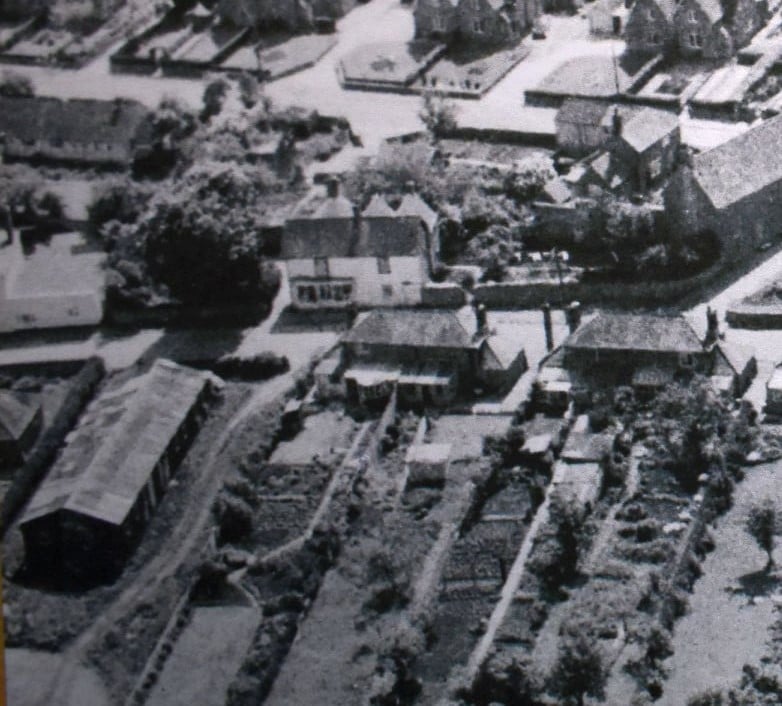 Stalbridge Hut on the left. 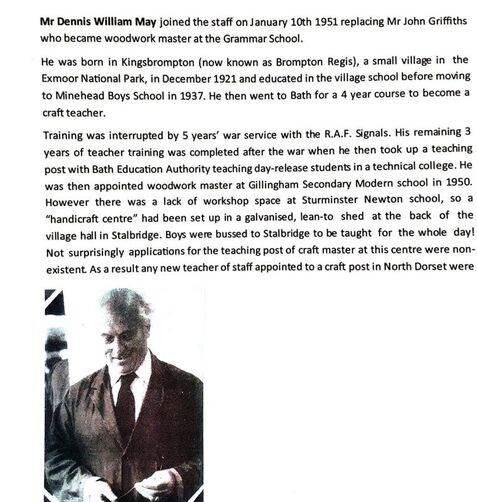 Chris Hughes
I recently learned of another function at The Hut in the late 40s and early 50s. The attached is an extract from Andrew Jenkins' book Gillingham School 500, detailing the career of one of it's craft masters Mr Den May. Apparently, a lean-to shed was set up at the back of the Hut to act as an outpost craft teaching workshop for Sturminster Newton and Gillingham schools. Mr May was one of the masters who taught there in the early 50s.
Any Stalbridge boys who attended Gillingham School in the 50s, 60s, and 70s will remember Mr May, but will probably be unaware that he once taught at Stalbridge Hut.
Back to The Ring