Personal details:
Born in Stalbridge 26th November 1892 and baptised on 17th December. He had one older brother Ernest, three younger brothers Howard, Alan, and Charlie, two older sisters Beatrice and Linda, and one younger sister Dora. The family lived in Silk House Barton in 1911. His father was a Miller and his mother a glove maker. His youngest brother Charlie was the father of Yvonne Drew now living in Grove Lane Close. Harry enlisted in 1914 at Sturminster Newton as a Trooper in the Hussars and by December he was in 6 Squadron, 4 Troop. He transferred to the Royal Fusiliers before he went to France on 20th July 1915.
Military details:
The 9th (Service) Battalion was formed at Hounslow on 21st August 1914 as part of KI and attached to 36 Brigade, 12 (Eastern) Division, which landed in France in May 1915 and remained there throughout the war, involved in the Somme in 1916 and again in March 1918.
On the morning of 24th March the Division arrived in the area of Senlis, Warloy and Bouzincourt and, after a confusing day, natural lines, such as the railway embankment north of Albert, were taken up to await the expected German attack. The first battle of Arras started soon after midday on 26th March when the Germans were seen advancing down the slopes into the Ancre valley. All units came under increasing pressure as the enemy pressed on. Many enemy attacks were repelled with heavy casualties, although the Division suffered 1634 casualties in halting their advance. It is almost certain that Harry Drew was killed during this battle. 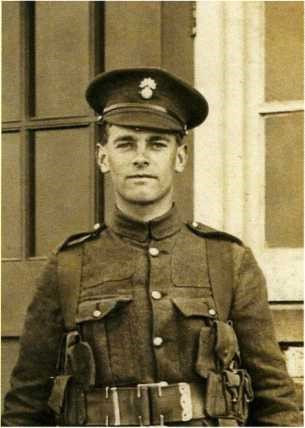