ERNEST FRANK HEDDITCH
Rifleman C/12958
21st Battalion, King’s Royal Rifle Corps
Killed in action Sunday 17th September 1916
Aged 20
He has no known grave. His memorial is on
THE THIEPVAL MEMORIAL, SOMME, FRANCE
Pier and Face 13A and 13 B
Son of John and Emily Ellen Hedditch of Silk House Barton, Stalbridge
​

Personal details:
Born on 31st May 1896 and baptised on 2nd August, he had two older sisters Bessie and Winifred and two younger brothers William and Jack. His father was a Mason and his mother a glover, and the family moved from Henstridge to Stalbridge around 1902/3. He was admitted to Stalbridge School in 1903 and left on 3rd June 1910 when he was 14. He was the great uncle of Nigel Pope who lived in Wood Lane. Ernest enlisted at Oakham on 10th January 1916 when he was a footman at nearby Cottesmore Hall.
Military details:
The 21st (Service) Battalion (Yeoman Rifles) was formed in September 1915 from volunteers from the farming communities of Yorkshire, Northumberland and Durham by the Northern Command. The Battalion landed in France on 4th May 1916 as part of 124 Brigade in 41 Division, and almost immediately became engaged in the first battles of the Somme. The last great Allied effort to achieve a breakthrough came on 15 September in the battle of Flers-Courcelette with the initial advance made by 11 British divisions. The battle is chiefly remembered today as the debut of the tank. The British made gains across the length of their front, the greatest being in the centre at Flers with an advance of 3,500 yards, a feat achieved by the newest British division in France in their first action. They were supported by several tanks, including the D-17 (known as Dinnaken), that smashed through the barbed wire protecting the village, crossed the main defensive trench and then drove up the main street, using its guns to destroy defenders in the houses. This gave rise to the optimistic press report: "A tank is walking up the High Street of Flers with the British Army cheering behind." This was the last large-scale offensive mounted by the British Army during the first battles of the Somme. Precisely how Ernest Hedditch died during it is not known.
41 Division memorial is erected in Flers in commemoration of their liberation of the village. 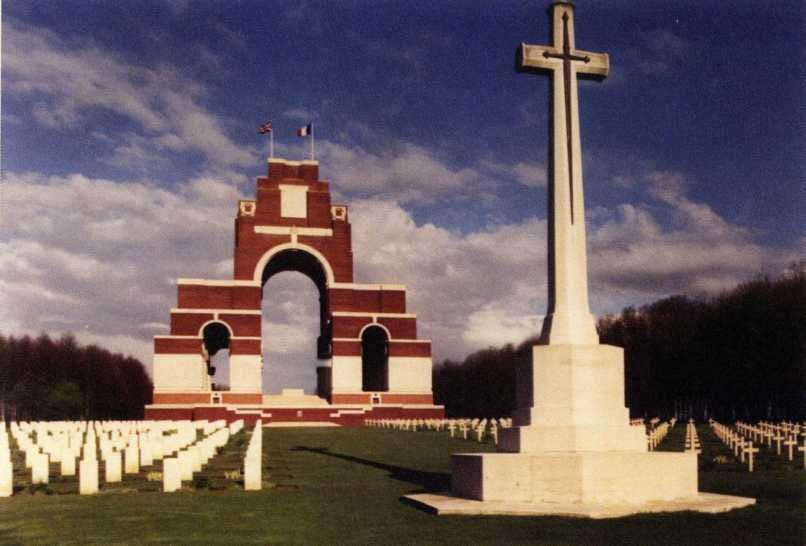 His name is on Pier and Face 13A & 13B, Thiepval Memorial
Back to Index