​Personal details:
Bom on 23rd November 1891 and baptised Sidney Ernest on 7th February 1892. He had three younger brothers Maurice, Allen and Fred, and three younger sisters Charlotte, May and Amy. In 1901 the family lived in a house with 3 rooms in Bagber and then moved to Stalbridge to live in No. 3 Anglesey Cottages arriving there in 1904. Charlotte was the grandmother of Ian Semple, still living there in 2021, and Allen was the father of Robert Gawler, living in Waterlake. Sidney's father was a farm labourer, and Sidney was a stonemason before he enlisted in Stalbridge on 31st August 1914 in the 5th Battalion. An early photograph taken in Middlesborough shows him in 8 Platoon, B Company.

Military details:
The 5th (Service) Battalion was formed at Dorchester in August 1914 as part of Kitchener's First New Army (KI), embarked in the Cunarder "Aquitania“ in Liverpool on 2nd July 1915 and disembarked at Lemnos in Gallipoli on the 11th. As part of 34 Brigade the Battalion suffered heavy losses at Gallipoli, and Sidney received a shrapnel wound to the head on 18th August probably during a series of assaults near Hetman Chair. He rejoined the Battalion two days later, but ended up in Gibraltar hospital in January 1916 with rheumatic fever, and was repatriated to England. By 2nd March he was in France at Etaples and transferred to the 6th Battalion on 20th August which by this time had taken part in many actions in the Somme.
By 28th October the Battalion was in Mansel Camp near Meaulte and set out on the 29th to relieve the 2nd Scottish Rifles near Lesboeufs in rain and hail, moving with great difficulty on roads of liquid mud. Their approach was shelled vigorously by the Germans and it is thought that Sidney Gawler died soon after being wounded during this operation. Reports from the battalion later suggest that some men might even have been stifled in the mud. 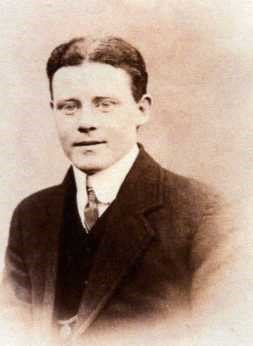 8 Platoon, B Company, 5th Battn. Dorset Regiment
Back to Index