​PERCY GATEHOUSE
Private 3/7918
1st then 5th Battalion, Dorsetshire Regiment
Killed in action Tuesday 26th September 1916
Aged 30
He has no known grave. His memorial is on
THE THIEPVAL MEMORIAL, SOMME, FRANCE
Pier and Face 7 B
Son of James and Harriet Gatehouse, Hewletts Farm, Stalbridge.

Personal details:
Born at Hewletts Farm on 3rd February 1886 and baptised Reginald Percy on 4th April, he was the member of a very large family. He had three older sisters, Emily, Mabel and Maud, two younger sisters Eva and Ivy, and five younger brothers, Arthur, Harold, Stanley, Claude and Leonard. His parents moved from Hewletts Farm to Snowdon House in Gold Street in 1918 when James gave up farming. Percy enlisted at Sherborne, initially in the 3rd Battalion and almost immediately transferred to the 1st Battalion.
Military details:
Percy's medal card indicates that he entered France on 18th February 1915 and probably joined the 1st Battalion there. All other sources show that he was with the 5th Battalion when he died, and the most probable explanation is that he was wounded when in the 1st, and was sent to the 5th when fit for service. The 5th only moved to France from Egypt in July 1916. By the 20th they were in the trenches in a sector on the Somme south of Arras. From 19th to 25th September the battalion enjoyed a good rest behind the lines, but a big effort in the region of Mouquet Farm and Thiepval started on 26th September. Heavy fighting in the face of effective German artillery and strong defences ensued, and it was not until later the next day that the British position had been sufficiently established to allow the battalion to withdraw. The battalion had suffered heavily in their first battle in France and of roughly 600 in action nearly two-thirds were casualties, with 122 killed or missing. His medal card states "Presumed dead 26-9-16". Percy Gatehouse was almost certainly one of these, particularly as his memorial is at Thiepval. 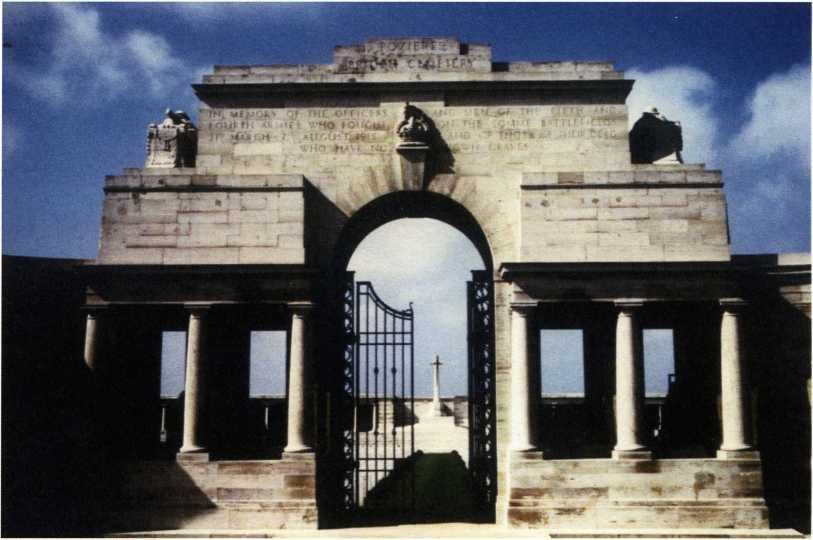 His name is on Pier and Face 7B, Thiepval Memorial
Back to Index